A great Saturday was had by all. We worked through all 12 characters concept silhouette line ups, came up with directions for each one and threw out ideas that weren’t working or were just down right meh.

We started with this: 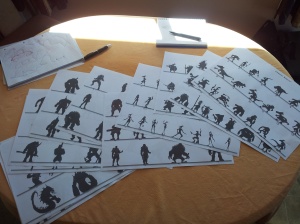 And ended up with this:

Many sheets with many notes and highlighter mark-ups. Looking at all the silhouettes it was cool to see just how much stuff we had produced so far. It felt like a good milestone to have finally reached.

Some characters ended up being harder to deal with than others, with the Wou and Shrubber needing considerable debate about how they should look and why they look that way. Where as others were much more straight forward, like the Rhorlan One Horn, who seemed to just have an awesome silhouette to start with.

At the end of the meeting some of the actions for the two of us were:

Once all that is done we will probably look at taking 1 character each all the way through to a final design just to try and figure out the pipeline for concept to tabletop, all while trying to finalize the ruleset and get more playtesting in. Busy (but awesome) times as usual 🙂