So here he is… finally.

The elusive and hard to figure out Drazz..

So the Drazz is our 12th character design. An Angular, Segmented, multi-limbed, Insectoid . Original idea was a human/spider hybrid. But has evolved to something more of a Hornet/Wasp.

One of my original ideas was that this guys can talk, but he has weird insect mouth parts – so its really difficult for him to talk to the others. This inability to communicate effectively often makes them a bit frustrated and angry, or sullen and withdrawn. 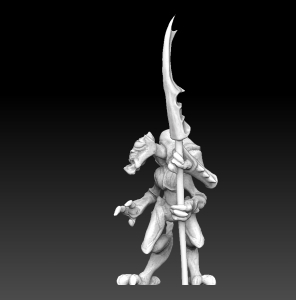 Part of the reason this guy took so long was I was trying to realize an idea that ultimately proved unmanageable. That they would have at least 6 limbs, and those limbs were interchangeable as either arms or legs… meaning he could just as easily stand on his hands and fire a gun with his feet.

Unfortunately that idea, while interesting and fun to think about – was really difficult to draw, sculpt and pose dramatically. I really struggled to get a good silhouette that got the idea across… or just didn’t look like a retarded monkey ant.

Ultimately I went with a earlier concept – a more standard 6 limbed creature. I haven’t completely abandoned my other idea – just put it back into development for a while. 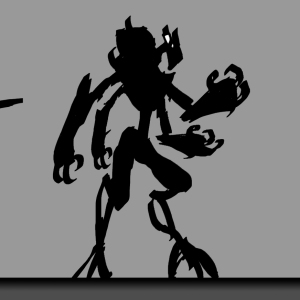