Hello and welcome back dear readers for another weekly installment of our Faith & Flintlock dev blog.

This week has been a tad hit or miss.

On the hit side we managed yet another playtest (2 in as many weeks!). This time the game was on Tabletop Simulator, and while it went well, it certainly highlighted how out of date our ttsim version of the game was (another thing to add to the ‘to do’ list). But it was fun and I got to build a list using the new list builder and that was also cool. Speaking of the list builder, all the Mime, Hantu and Cinder cards are in along with the old Fortune and Fate decks. It’s been updated and tweaked and now is our one stop shop for card data. Along with that the Isogorean deck also saw some further development but still under halfway done on those.

On the not so great side of the week, the Drazz sculpt didn’t even get opened, let alone worked on. Nor were the Hantu cards from the list builder added back to the physical cards for real world playtesting. But hey you can win them all. 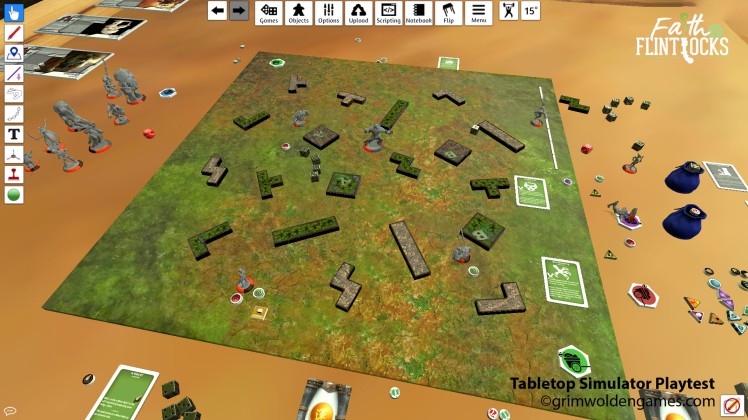 Taking a gaze into the hazy mess of next week. I want to finish the Isogorean cards (having them all entered into the list builder would at least tick that box for me), update the Fortune and Fate decks so that everything is back at the same version (real world cards, rules, head rules and ttsim). And I also want to do more Drazzs sculpting because goodness knows it is taking far longer than I wanted to be able to finish that sculpt!

And after all that if I’ve got any spare time (I doubt it), I’d love another play test 😀